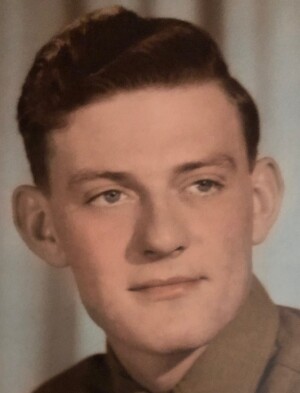 Dale H. Haas, formerly of Loysville, died on December 13, 2020, as one of many victims who fell to the COVID-19 pandemic.  He was 94.  He was born in New Bloomfield on October 6, 1926 to the late George H. Haas and Anna (Comp) Haas.  He is survived by his devoted wife of 70 years, Lorene (McMillen) Haas, four sons:  Gary (Cindy) Haas of Millerstown, Dale G. (Sally) Haas of Elliottsburg, Dan (Rhonda) Haas of Elliottsburg, and Tom (Sue) Haas of Williamsburg, ten grandchildren and fifteen great grandchildren. In addition to his parents, Dale is preceded in death by two brothers, Robert H. Haas and Carl E. Haas.

Dale was drafted into the US Army in December 1944, in the middle of his senior year while attending Ickesburg High School and before completing high school.  He proudly served his country in World War II in the South Pacific with the 40th Division COK 108th Infantry.  He later earned his GED.  He was a member of New Hope United Church of Christ in Landisburg, where he taught Sunday School, Landisburg Fire Company and Ambulance Club, Ickesburg Lions Club, Blain Sportsmen’s Club, Ickesburg Sportsmen’s Association, American Legion Post #177 in Newport, VFW Post #9118 in Landisburg, and the DAV Post #49 Newport.  He retired as a warehouse supervisor from the Mechanicsburg Naval Supply Depot.

Dale enjoyed hunting and fishing.  He was loved by many and will be remembered for years of volunteer work for both his Church, in distributing food for the local Food Bank, and hours and hours of barbecuing chicken for the Lion’s Club. He was happiest being around family and friends and most importantly, his grandchildren and great grandchildren who were his pride and joy.

Services are being held privately and interment will be at Centre Presbyterian Cemetery with Pastor Joshua Craley officiating, including military honors.

Memorial contributions may be made to the New Hope United Church of Christ or the Veterans of Foreign Wars.

To send flowers to the family or plant a tree in memory of Dale H Haas, please visit our floral store.